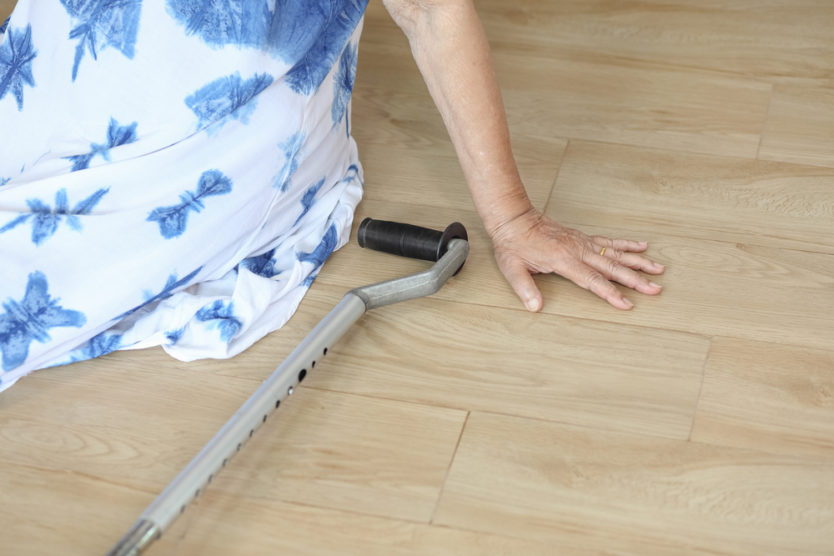 A new study finds that hospitalizations of people who had eye trauma, whether or not it was the primary injury, rose by 18 percent over 13 years. Most of the increase was due to falls among people over age 65. But there are simple things you can do to keep yourself and your loved ones safe.

Between 2001 and 2014, nearly a million hospital inpatient admissions had eye injury as either the primary or secondary diagnosis. The number of patients who were hospitalized primarily because of an eye injury decreased, but the number who were admitted to the hospital for another reason and had also suffered an eye injury rose 31 percent—from 14.5 to 19.0 per 100,000 people. The researchers estimated that 82 percent of the increase in secondary eye injuries was attributed to falls in elderly patients.

The change in eye injuries is likely caused by the increased rate of falls in an aging population, the researchers said. They note that the rate of falls in the United States has increased steadily over the past decade and is likely to continue to rise as more people live longer and the elderly become more mobile.

Among patients who were primarily hospitalized for an eye injury, the most frequent diagnosis was orbital fracture, or traumatic injury to the bone of the eye socket. These injuries are usually the result of blunt force trauma to the eye. For patients whose eye injury was a secondary diagnosis, the most common eye injuries were black eye and damage to the eyelids and tear glands.

“People with decreased vision are at increased risk of falling,” said Dr. Jay Pepose. “Common vision problems such as cataracts, glaucoma and macular degeneration all can cause a person to misstep and fall. Fortunately, these conditions are often preventable or treatable.”

Cataracts can cause blurred vision, making it more difficult to see and increasing the risk of falling. One recent study found hip fractures are less likely after a person has cataract surgery.

People with macular degeneration have decreased central vision. “This means someone can easily miss something in their path and trip over it,” Dr. Pepose said.

People with glaucoma often lose their peripheral (side) vision, which makes it easy to run into things.

Stroke patients also may have vision problems that can lead them to bump into things and fall.

Each year, more than one out of four older people fall, but fewer than half tell their doctor, according to the Centers for Disease Control and Prevention (CDC). Falling once doubles your chances of falling again. In 2015 alone, more than 28,000 older adults died as a result of a fall.

To reduce the risk of falling, people 65 and older should have their eyes checked annually.

The U.S. Centers for Disease Control recommends the following steps to reduce your risk of falling:

• Talk to your doctor if you have fallen or feel unsteady. Some medicines can cause dizziness or sleepiness and increase the risk of falling. Also have your feet checked and discuss proper footwear with your caregivers.
• Engage in regular physical activity—such as tai chi, yoga or water aerobics—to improve your strength and balance.
• Remove clutter in your home that can increase the chances of tripping.
• Get rid of small throw rugs or use double-sided tape to keep them in place.
• Install grab bars next to and inside the tub and next to the toilet.
• Use non-slip mats in the bathroom and on shower floors.
• Make sure you have good lighting everywhere